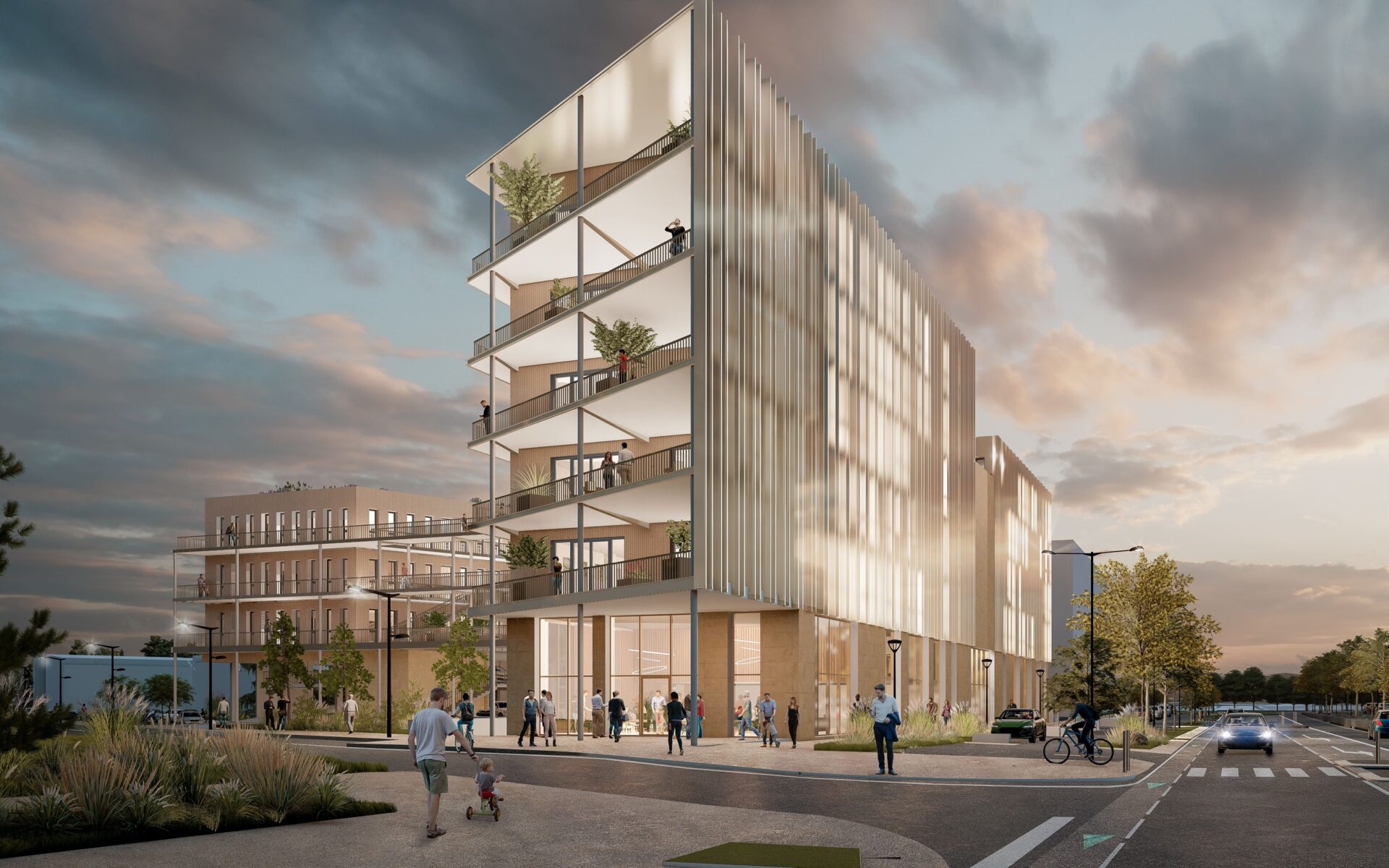 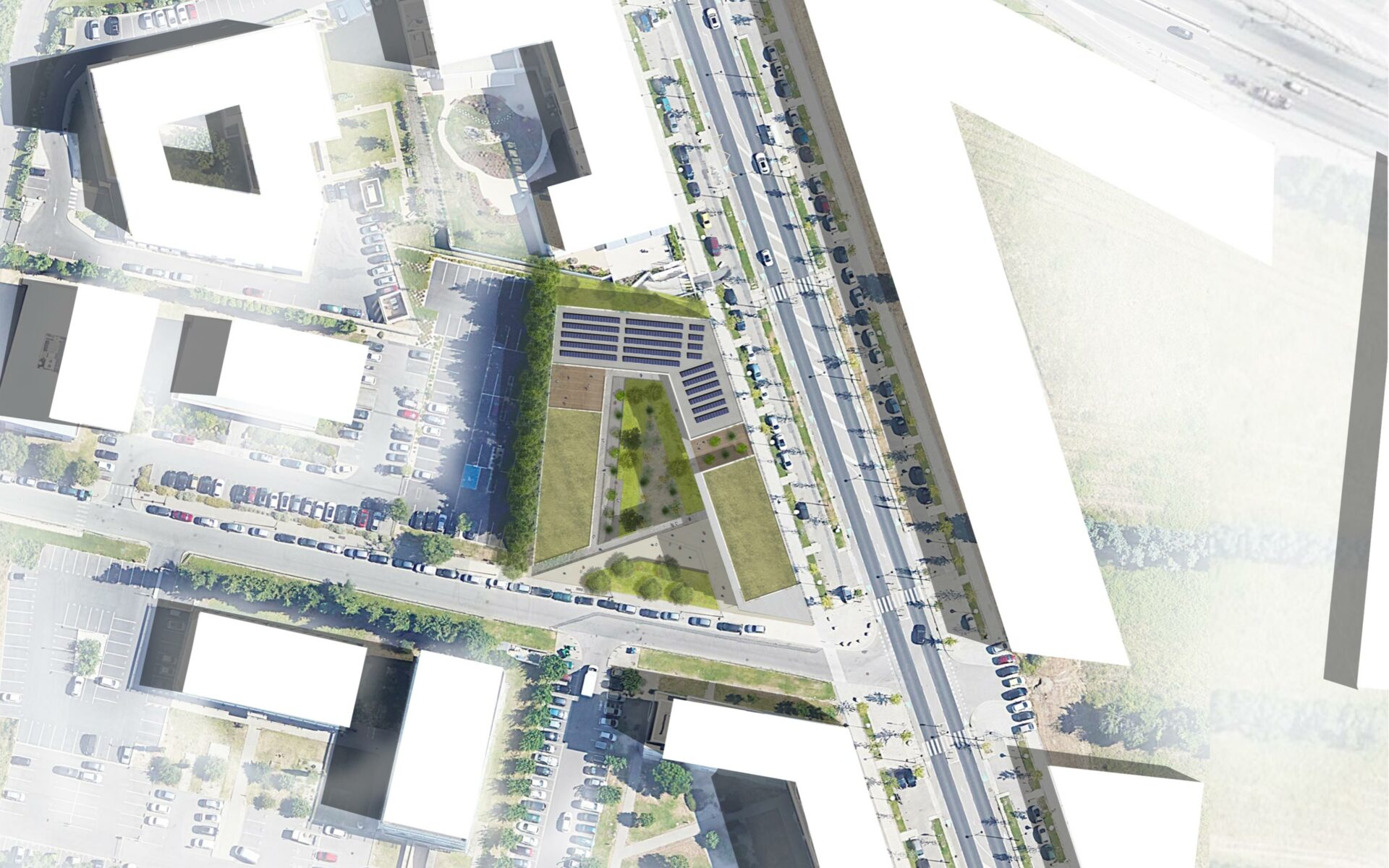 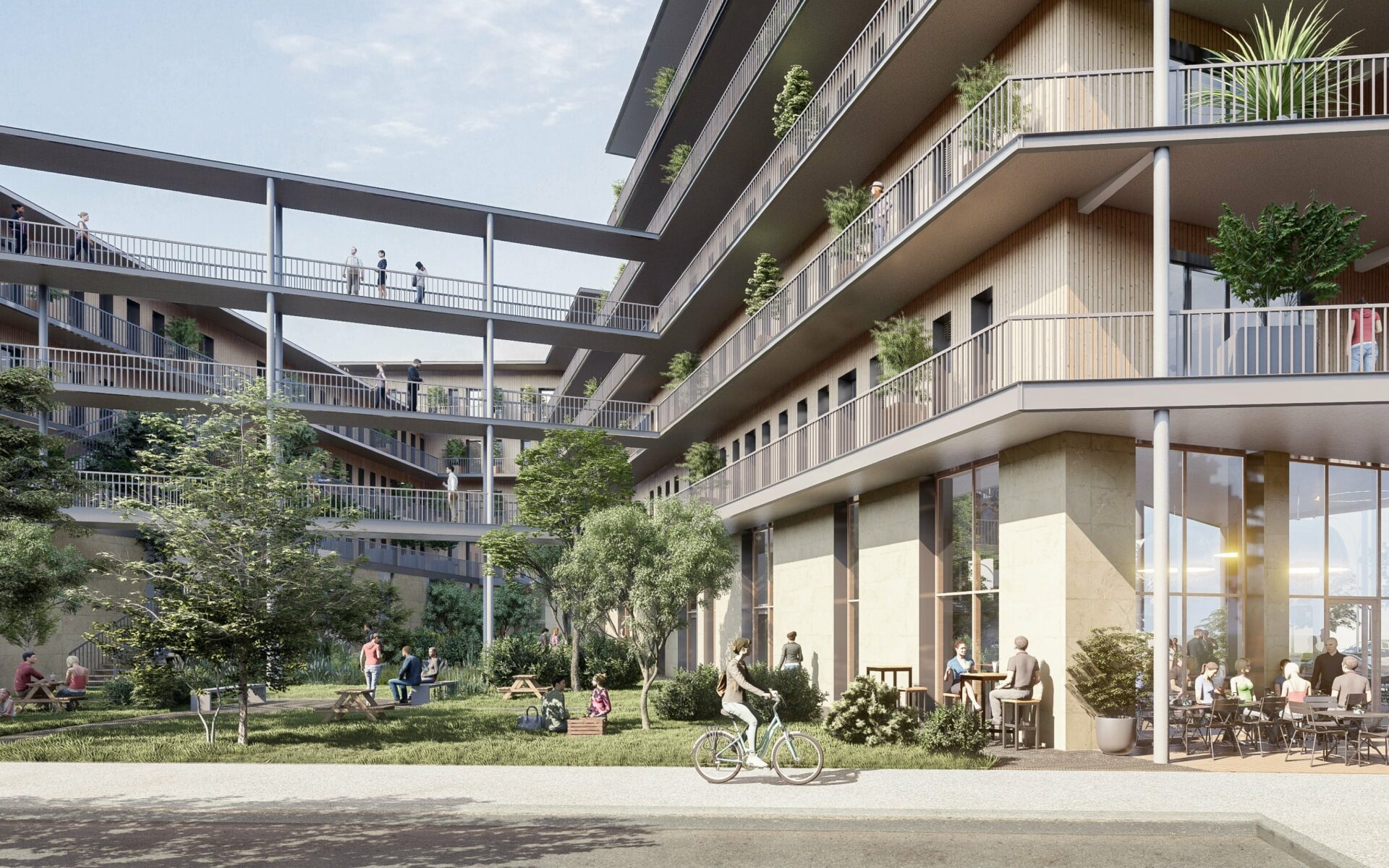 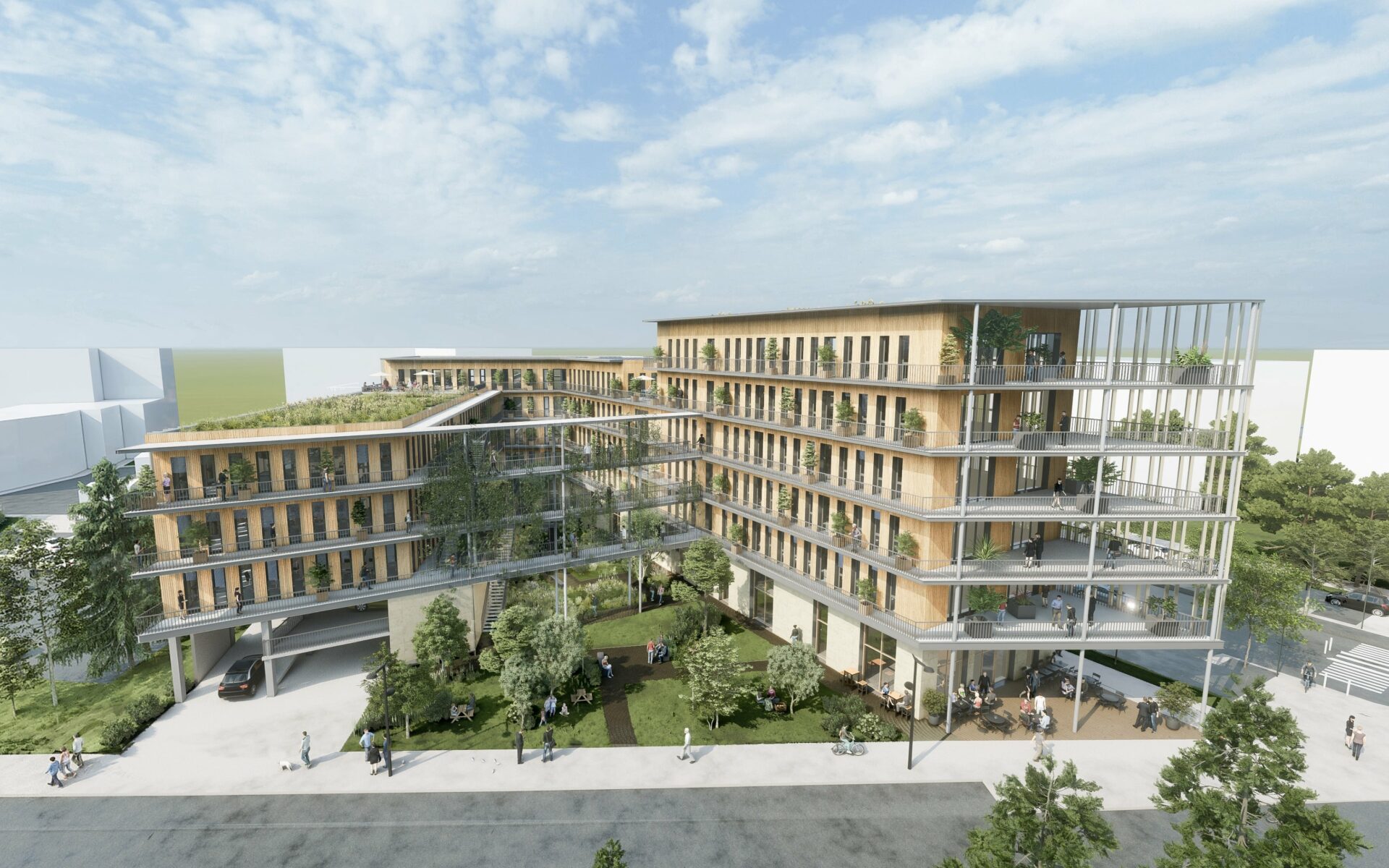 An innovative and flexible office and retail building. On the agenda: a climbing gym, a restaurant, coworking spaces, co-living areas, etc.

Located at the crossroads of a neighbourhood in full renewal, near the TGV station, this project had to create a visual landmark and at the same time open up to the outside world by creating a meeting place.

Motion is a living, active building, it features the users who walk through it and give it life.
A mixed-use operation, with the base differentiated from the upper floors in order to animate the public space by proposing a ground floor that dialogues with the street.

Construction had to be innovative and flexible. Faced with contemporary needs, it now seems inevitable to imagine architecture through the prism of reversibility.

Thus, commercial spaces can be deployed on mezzanines, the layout of the office floors is completely free and even the car park can be converted into a laboratory, a shop or even housing, without affecting the upper floors. 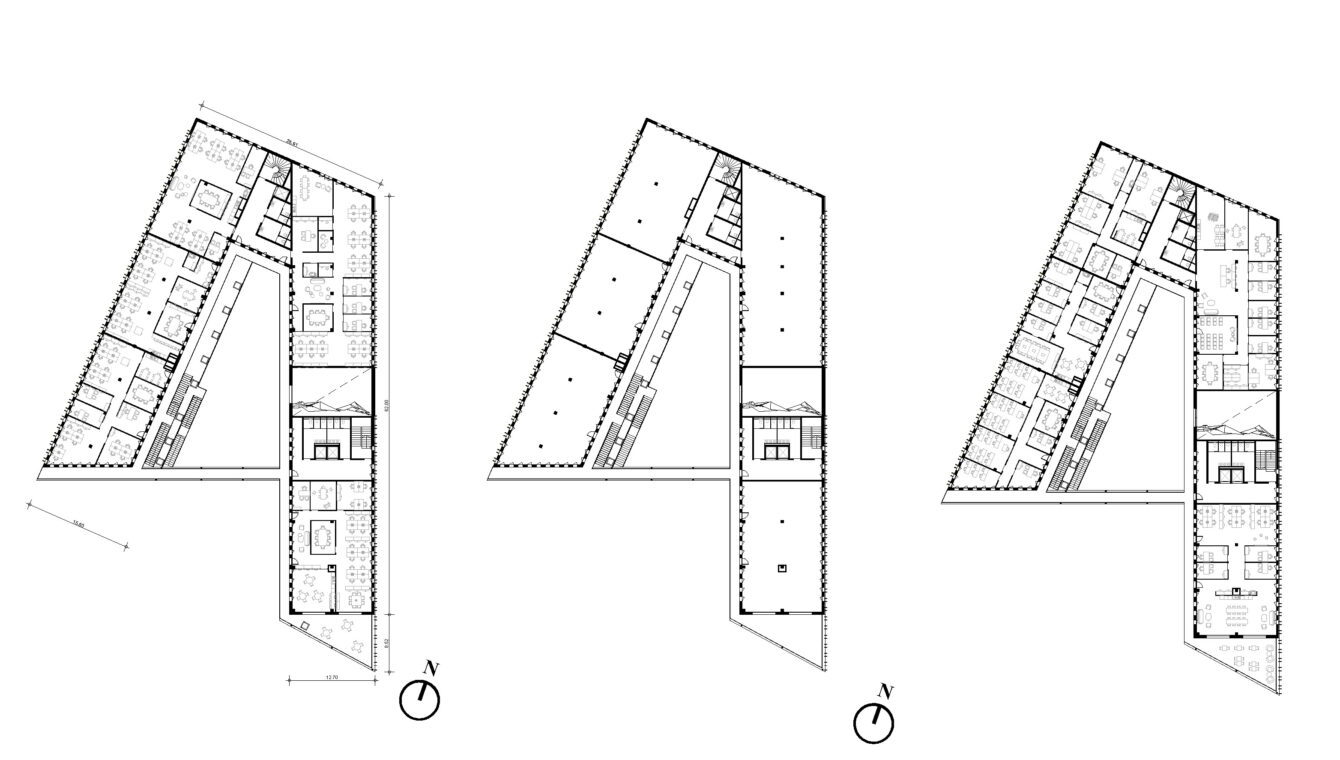 The layout of the buildings within the plot is the result of a study of the site, which is widely exposed to the southern sun and swept by the Mistral wind from the north, accentuated by the location of the site at the confluence of the Rhône and the Durance.

In an urban context in full mutation, the project seeks to open up to the public space while dynamising the Avenue de la gare thanks to a stepped spread, winding from one corner to the other of the plot, respecting the course of the sun.

With its “A” plan, the feet of which open towards the south, and its dynamic spread, the architecture fulfils its role as a shelter by offering a place to live around the heart of the green block.

This centrality is set off by a set of external walkways that contribute both to the solar protection of the façades and to the horizontal circulation of users, thus allowing them to stroll around the planted patio. 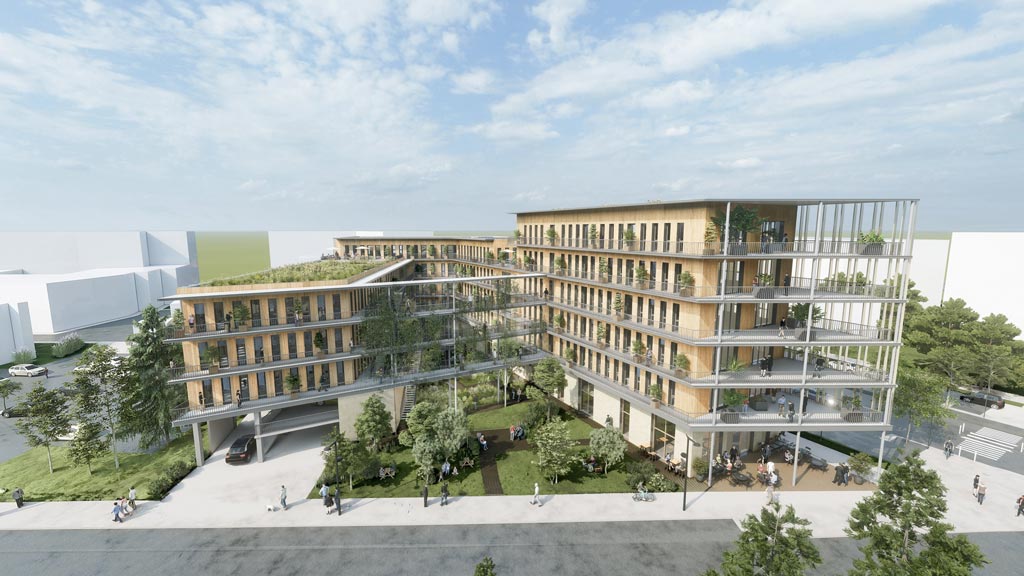 The project’s only R+6 volume, the bow of the South/East corner, materializes the entrance to the office floors.
Symbolically separated from the rest of the volume by a gap to the north, connected to the west wing by a set of footbridges overhanging the heart of the block, this volume constitutes the project’s lighthouse, creating the link/transition between public and private space, a volume that interacts. 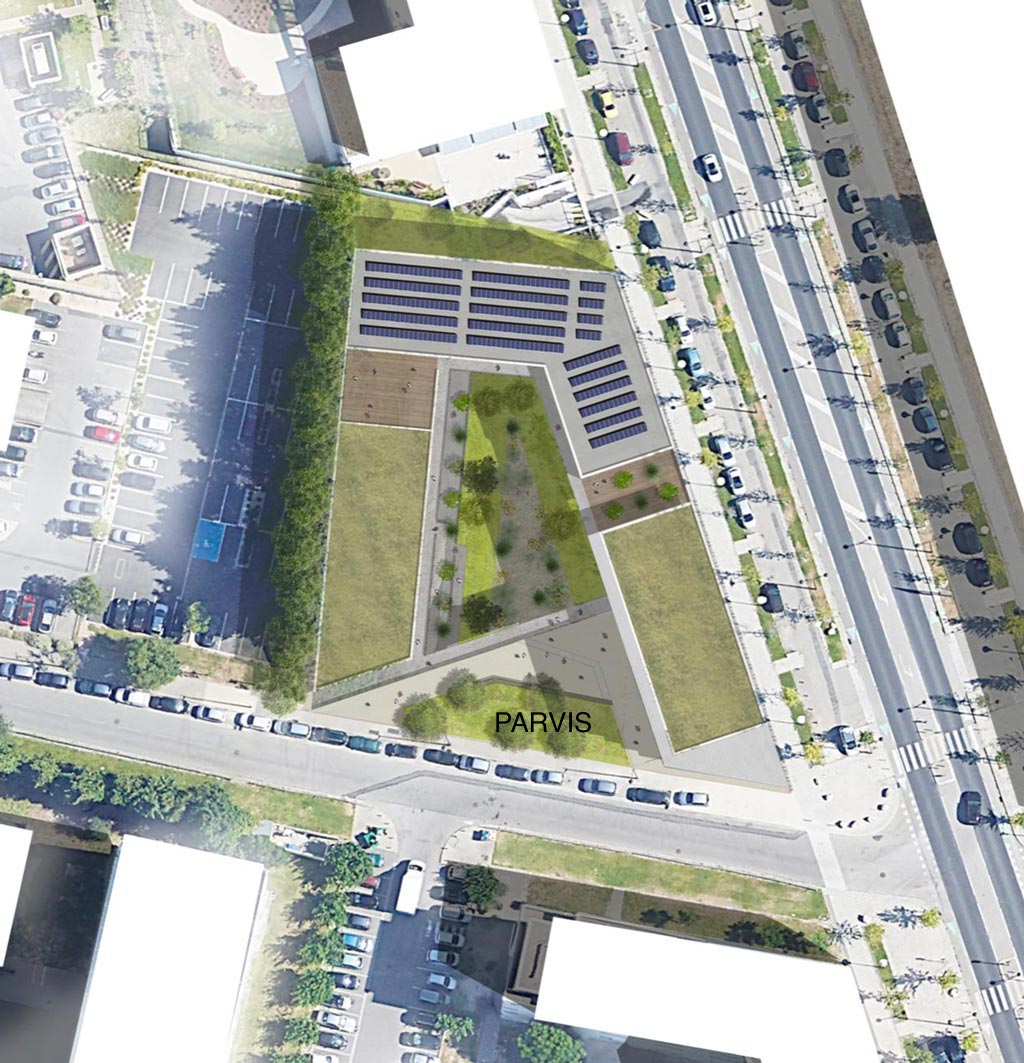 The heart of the block is the plant space around which the entire architectural project is structured. It is a source of greenery and a thermal asset for the building, a source of coolness in summer, the selected vegetation loses its foliage in winter to let the light through.

Designed as a breathing zone along the public pedestrian circulation, it is an open space, inviting people to take a break through the presence of benches and a step. 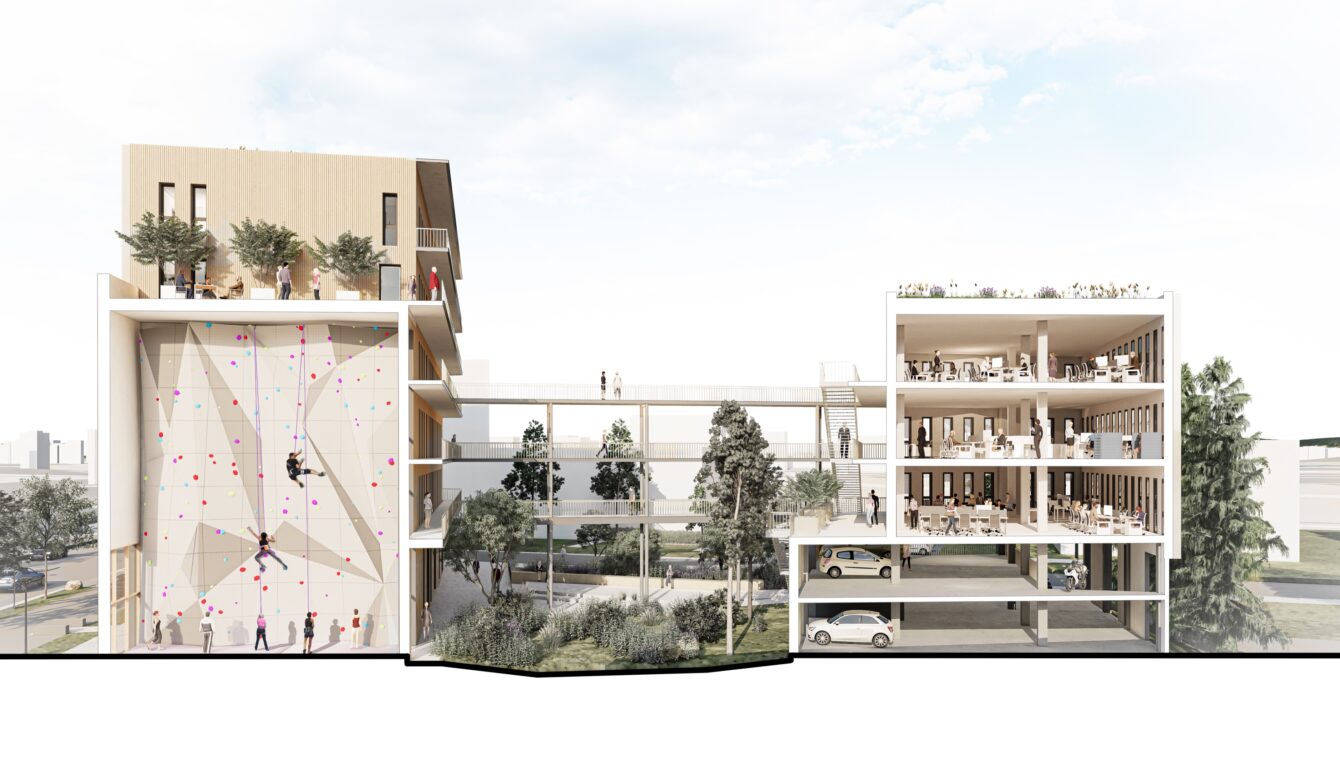 In a context where construction must be innovative and flexible in the face of contemporary needs, as a direct result of the post-pandemic period, it now seems inevitable to imagine architecture through the prism of reversibility.

In the proposed project, this is expressed in different ways, from the possible use of mezzanines on the ground floor commercial spaces, to the total freedom of layout on the office floors, or the gridded distribution of vertical ducts.

However, the most innovative proposal is the reversible parking solution, where a car park can be converted into laboratories, shops or even housing, without affecting the upper floors.

With a mobility palace nearby and a public transport network in the making, the two levels of parking provided for in the project may no longer be essential for the proper functioning of the building; on the other hand, there is a growing demand for innovative work spaces (workshops), fablabs or laboratories.

The implementation of an intermediate slab with a demountable and reusable framework, combined with a structural framework adapted to several programmes (Laboratories, Workshops, Housing, Offices) makes it possible to respond to current needs while allowing for programmatic evolution and participation in the future mutation of the ZAC.

More precisely, by anticipating a different structural framework
from that of a classic car park (5m/6m/5m), we make it possible
to mutate the ground floor / 1st floor into several functions,
while maintaining a 16m wide base: 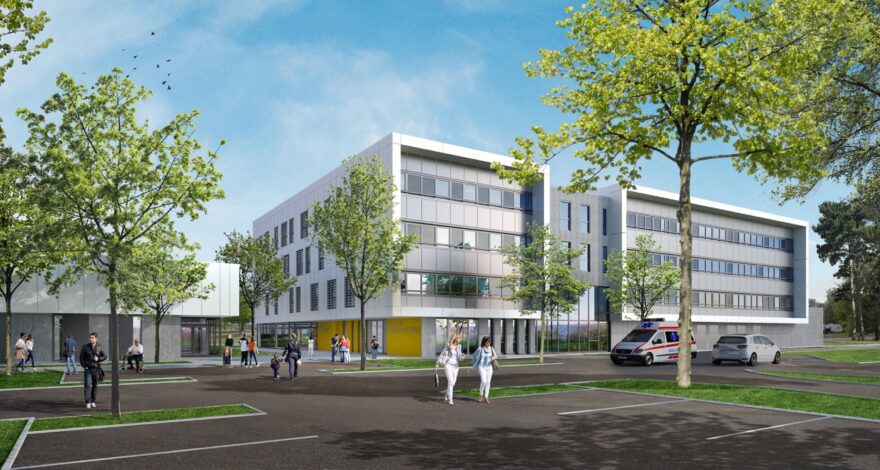 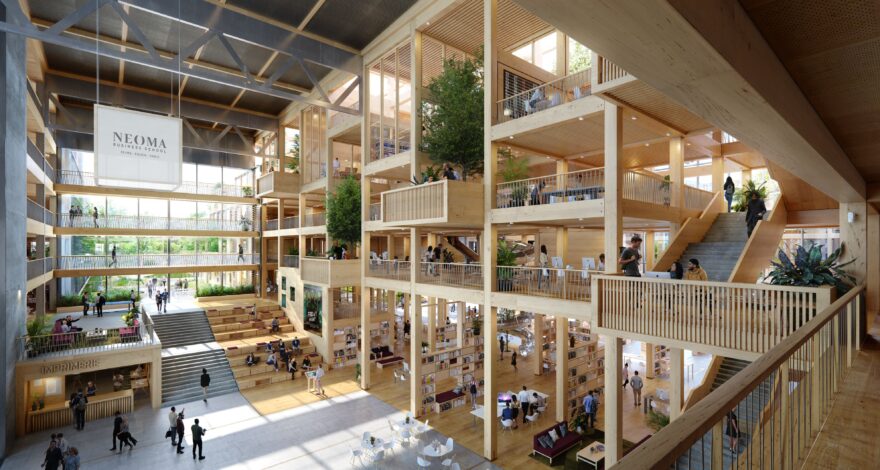